I thought it may be of some interest to create a section to show poorly installed work and general problems that I come across from day to day which I am asked to correct. 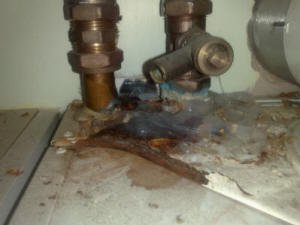 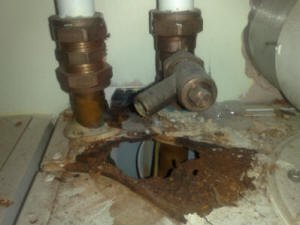 Top of boiler casing with the mastic removed

The family were lucky that they had not suffered from carbon monoxide poisoning.  The boiler was made safe and replaced. 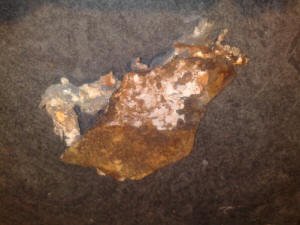 It had clear mastic the type to seal around a bath spread across the top of it.  It was quite clear looking through the mastic that the boiler casing had suffered for a leak which had rusted the casing.  I did not have to press very hard to remove the mastic which revealed a 50mm hole 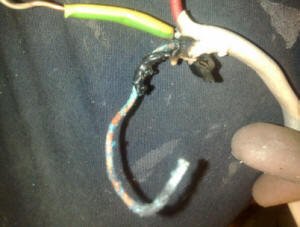 Called out to replace an immersion heater and found that normal cable, that would be used to for a ring main circuit, not heat resistant, had been used.  You can clearly see that the cable had started to melt.  The client was very lucky that this had not caused a house fire. 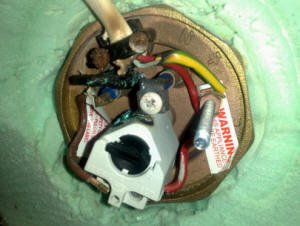 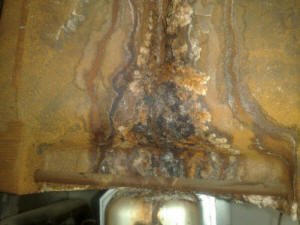 This boiler had not been serviced for many years.  It had been leaking for years but had gone un-detected.  The boiler has now been replaced. 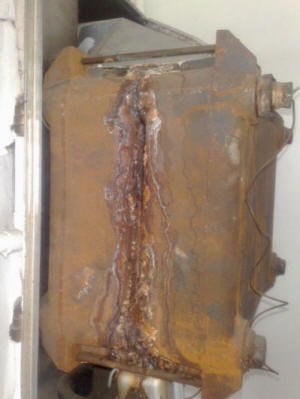 These fault can be picked up during a regular annual service 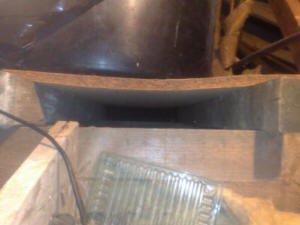 A common problem encountered.  A cold water storage cistern contained 50 gallons, 227 litres of cold water which weighs 500lbs or 227 kilos.  The photo shows the supporting board made from chip board.  Chip board in not strong enough, especially if if become wet or damp.  If this tank had been left, the plastic tank could have dropped through the chip board or split 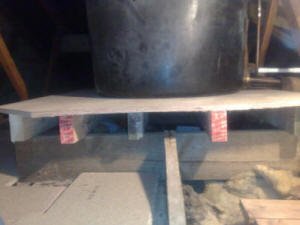 The base board was replaced with 18mm plywood and additional supporting  beams added. 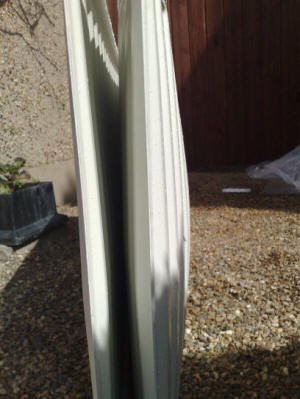 This is a radiator which has expanded due to pressure and internal rusting.  The cause of the problem was firstly the original heating system had be converted badly when a new boiler was changed 15 years ago.  The installation was left with only a 15mm combined cold feed and open vent.  To meet current regulation a heating system should have at least 15mm cold feed and a 22mm open vent correctly installed.
In this case the cold feed had become blocked,  so it could not allow the expanding water within the radiators to expand safely up into the header cistern in the loft.  So the water expanded within the radiators and found the weakest point, this radiator.  Although not really indicated by the photo the radiator had expanded by over 75mm.  The radiator itself is still strong, I laid it flat and jumped on it (82kg) several times, it had no effect.  I expected the panel to pop back in.  It just goes to show how much pressure must have been in the central heating system.
It was a good job that the Client noticed this radiator hidden behind the sofa, and that it had not split, which would have sent water at 80 degrees spraying into the room.

Pipes Through Floor Joists Cause Noise 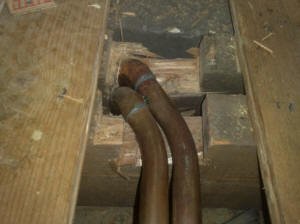 The Client was complaining about his central heating pipes making loud noises when heating up and cooling down.  Having taken most of the floor up and finding heating pipes having no felt between them and the wooden joists and pipes wedge up against floor joists in many areas, I found this nightmare.  The left hand photo shows two 22mm heating pipes that have been installed vertically through a floor joist, this is something that you never do. The joist was 50mm wide, due to the two holes which had been drilled vertically through it, it now only has 10mm of timber remaining.  The right hand photo is another shot of the two pipes from a lower angle.
This installation has left the floor joist in a dangerous state, all that is holding it up, is the 10mm section of timber remaining by the pipes, and the floor boards nailed to it.  The floor will start to bounce and the ceiling below will crack.  The Client was informed and advised to have the joist bolted together.
These pipes were rubbing against the wood, as they passed through the drilled holes, causing the noise.  These pipes were cut out and made smaller as they were only supplying one radiator downstairs. 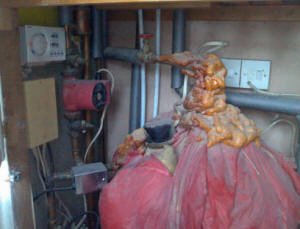 During a house inspection survey for a prospective purchaser I found this unusual installation in the airing cupboard.  Expanding foam had be sprayed around the top of the hot water cylinder.

I Never Did Find Out What This Was All About

This photos shows an installation of a cold water storage cistern and the smaller heating header cistern right at the back.  I was asked to advise on the installation. The space was so small even I could not get in there, and I am quite slim.