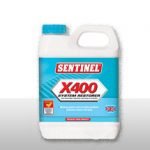 There are many thousands of ageing central heating systems with circulation and boiler noise problems caused by the accumulation of sludge, corrosion deposits and scale, but traditional methods of flushing just don’t get rid of all the debris, and problems often quickly return.  Power flushing is the most efficient method of cleansing the entire central heating system, from the radiators, circulating pipework, boiler and valves. The principle is to create a powerful fresh water flow under controlled conditions to remove debris from the system. By connecting the power flushing unit to the heating circuit in place of the system pump, boiler or radiator the circuit can be thoroughly cleansed of corrosion debris. When used in conjunction with a chemical cleanser  a typical power flush can be completed in 4-7 hours.

When a new heating system is fitted in a house, corrosion starts immediately. Initially the oxygen in the water starts to attack the radiators internally.

Please note: Powerflushing will note remove blockages. However physical blockage are seldom found in a heating system and powerflushing in 99% of cases will bring your aging system back to life.

These collect in the system and form a black sludge, which causes all sorts of problems such as boiler noise, repeated pump failures or poor circulation, often all three!

1. One or more radiators are completely or partially cold.

3. The boiler clumps and bangs, especially at start-up.

4. The central heating header tank is warm (or even hot!).

6. Black water from radiators when emptied or bled of air.

7. The age factor: systems 10years of age upwards will have a build up of corrosion.

At the end of the flushing process, the system contains fresh clean water and reinstatement of the system to normal operation takes only a few minutes.

System flushing will not remedy design or mechanical faults, which should be rectified, but in many cases it will cure the problems caused by these.

Adding an inhibitor will dramatically slow down further corrosion, and is always added as the final process of Power-Flushing.

Call now to book your PowerFlush